Alphabet Car Wash Sensory Bin: Sensory Bins are a fabulous tool for learning. They are a quick and easy way to get children engaged while exploring a variety of different skills and concepts. 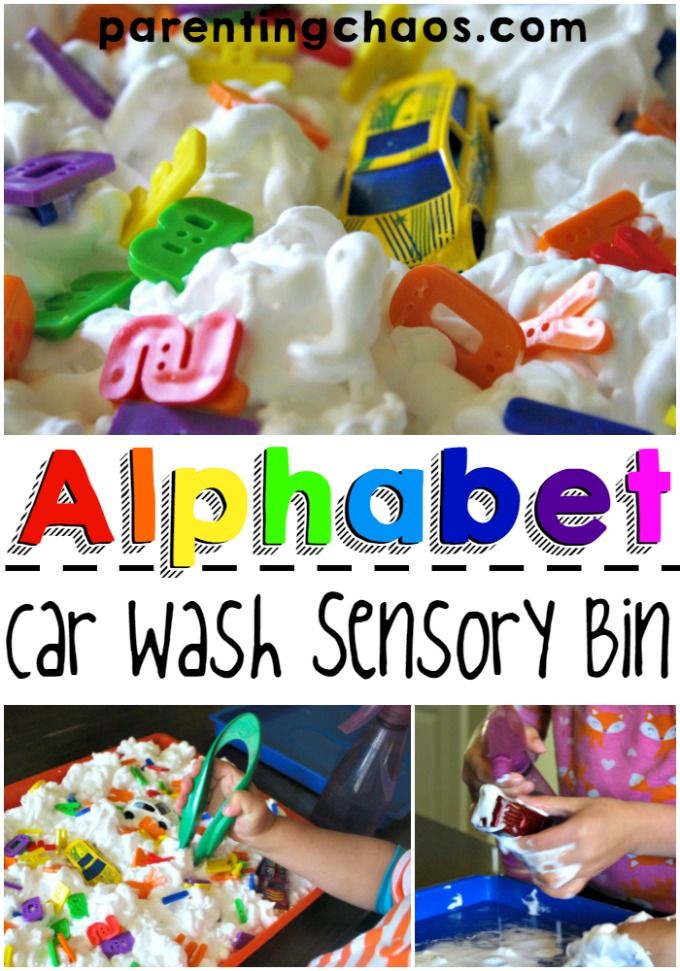 So…I keep on telling myself I am going to get this whole morning with four kiddos thing down, but…it’s a struggle. This morning to keep the kids entertained long enough to load the dishwasher, shower, and feed baby I decided to give a sensory bin a try. It was a major success (and honestly a pretty big mess too). We played with this activity for over an hour and it brought out so many fantastic conversations and challenges! 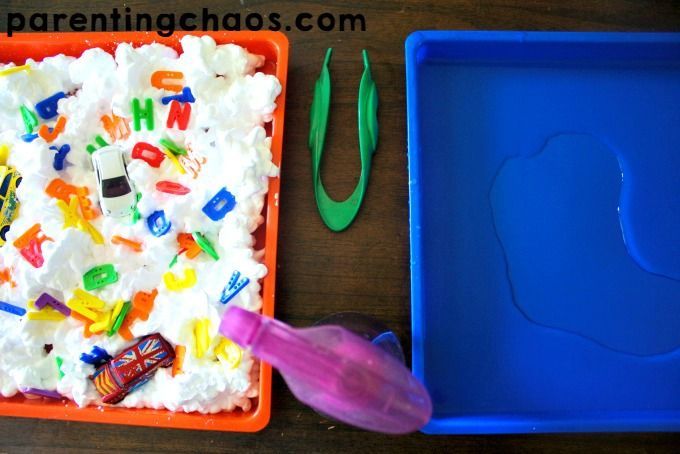 How to Play with Your Alphabet Sensory Bin:

Setting up this activity is quick and painless. Simply grab your two crafting trays and cover one with shaving cream. In the other tray pour a very tiny amount of water (you do not want to over do it as kids will also be spraying water into this tray). 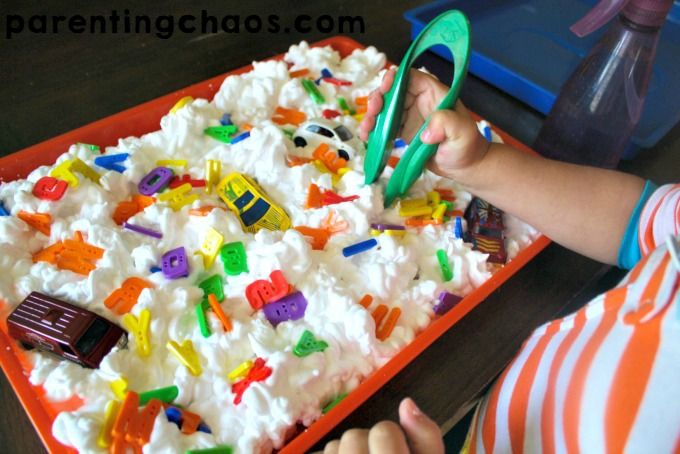 Then fill your spray bottle, set out your fine motor tools, and dump your ABC Buttons and Hot Wheels into the tray with the shaving cream. 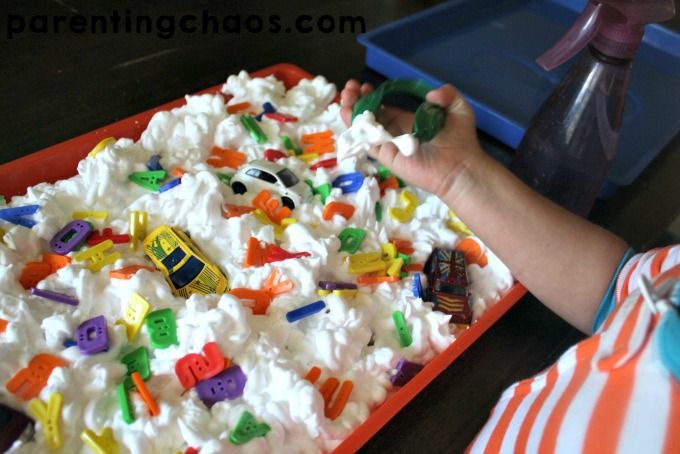 My kids didn’t hesitate to jump straight in! 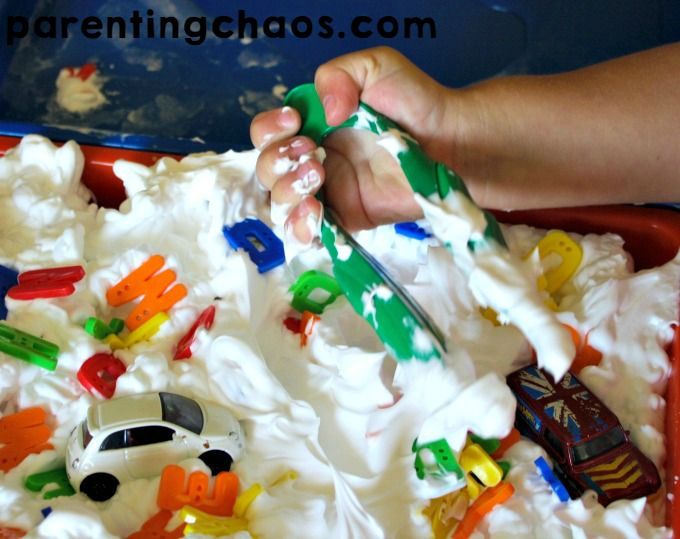 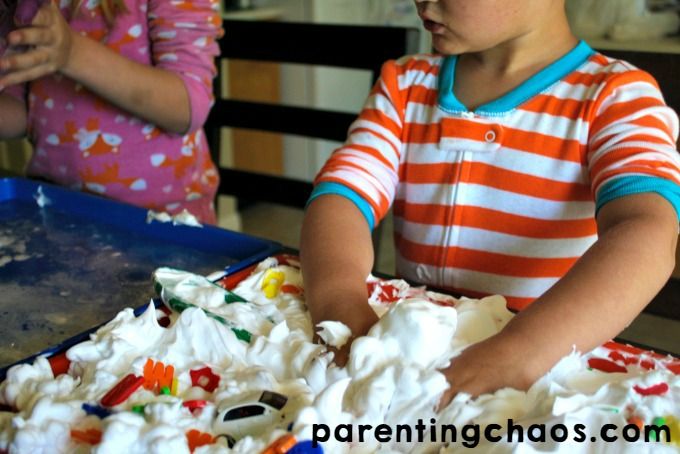 The older kids took turns spelling out words with the letters that were found. 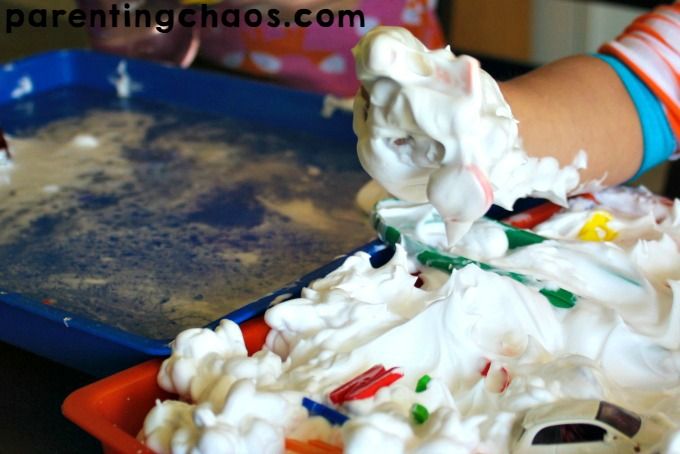 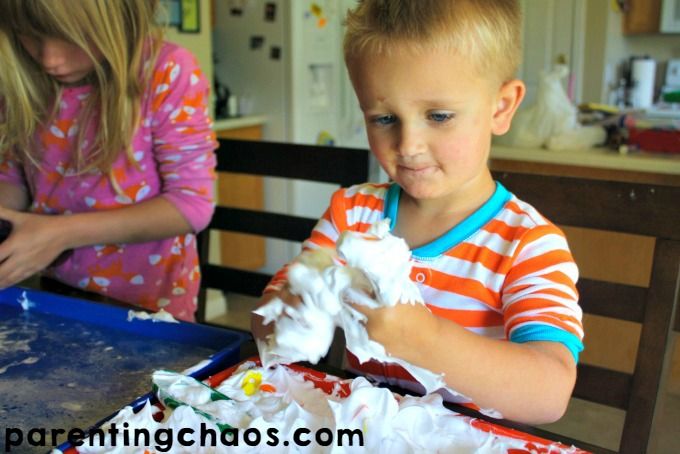 Meatball had a blast digging for those letters and handing them off to the girls. It was super neat to watch them teach him which letter was which as they worked on their spelling. 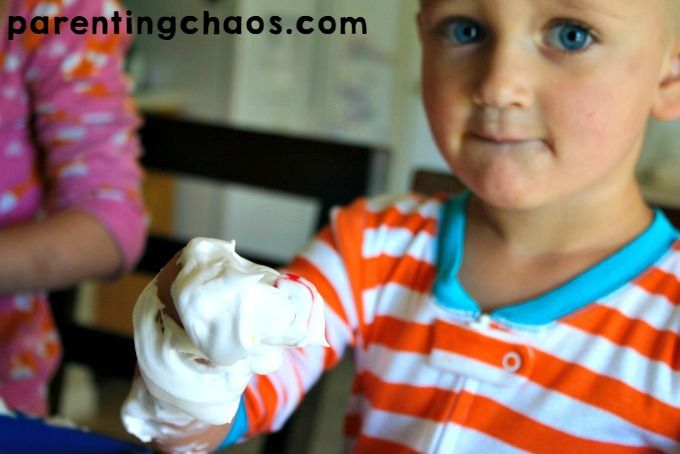 It was also super cool to watch them take turns squeezing the spray bottle and washing off letters that were handed to them. 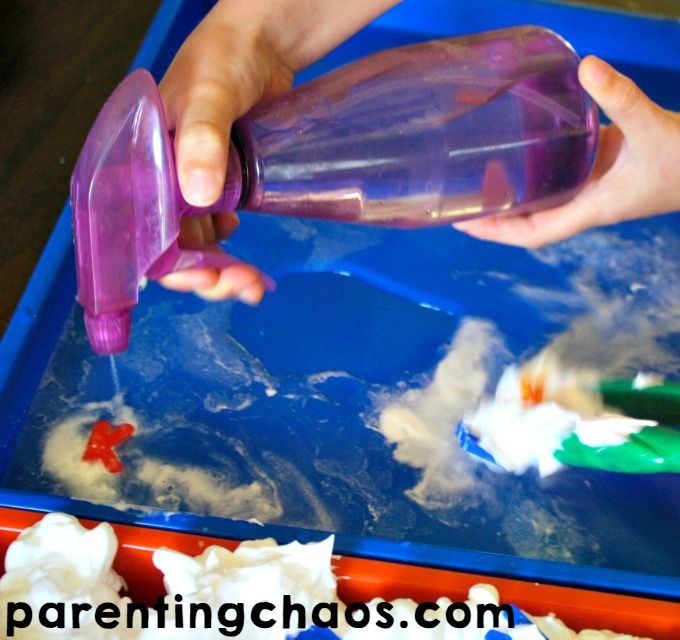 Spraying down the cars was by far a favorite though! 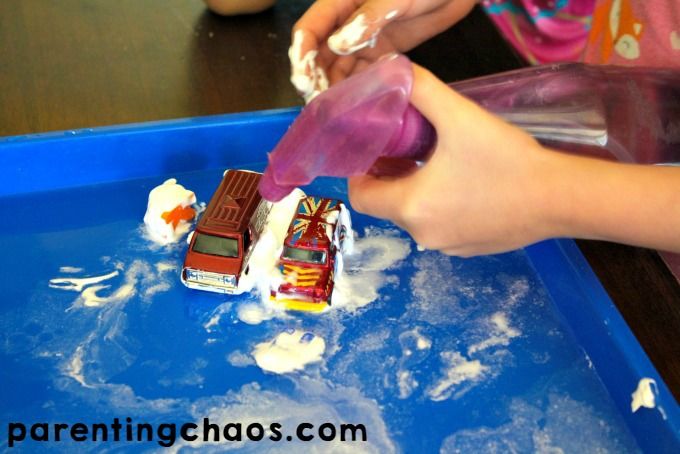 They had so many nooks and crevices that required an attention to detail. 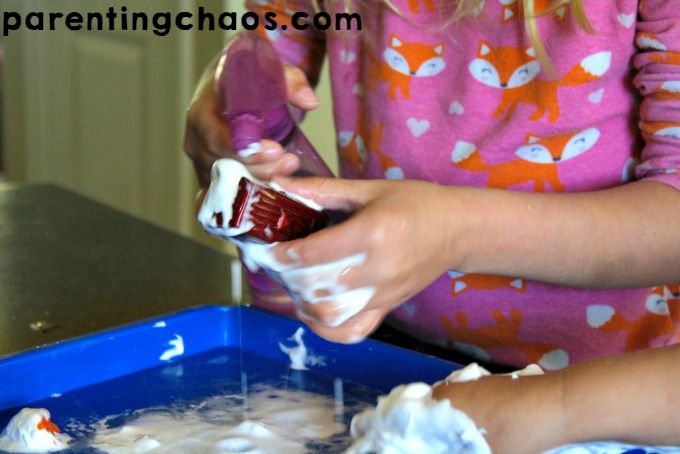 Eventually the kiddos discovered that the spray bottle had different settings and they went to town experimenting with the way the different streams felt. 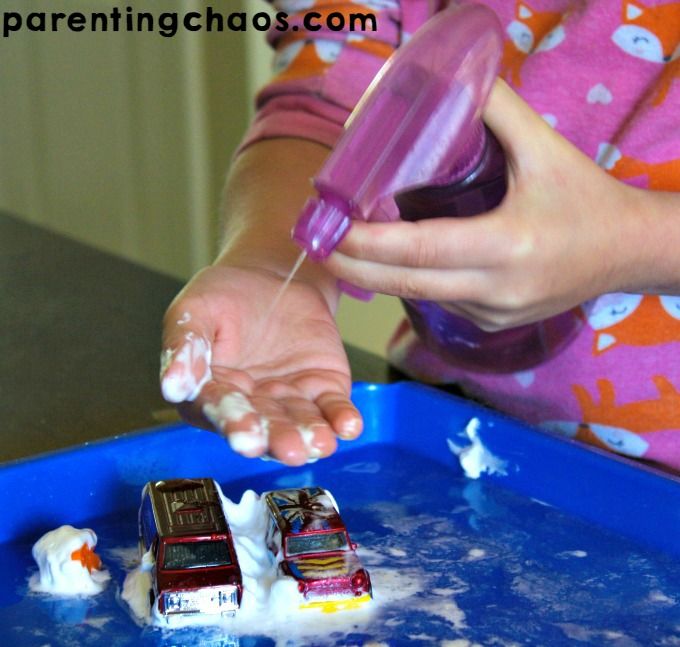 And then came the mess…and YES IT GOT MESSY! 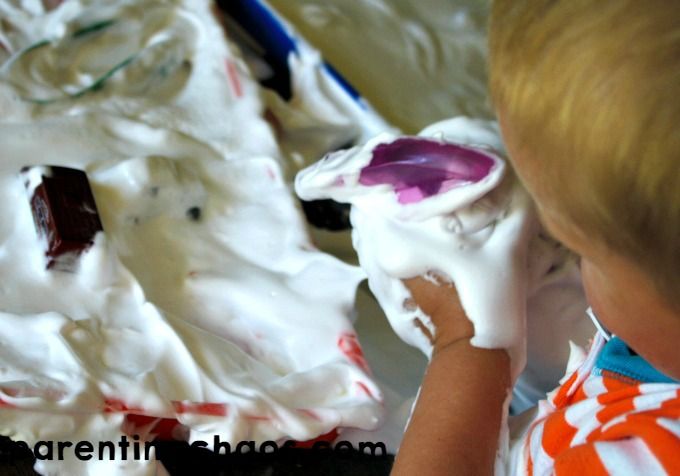 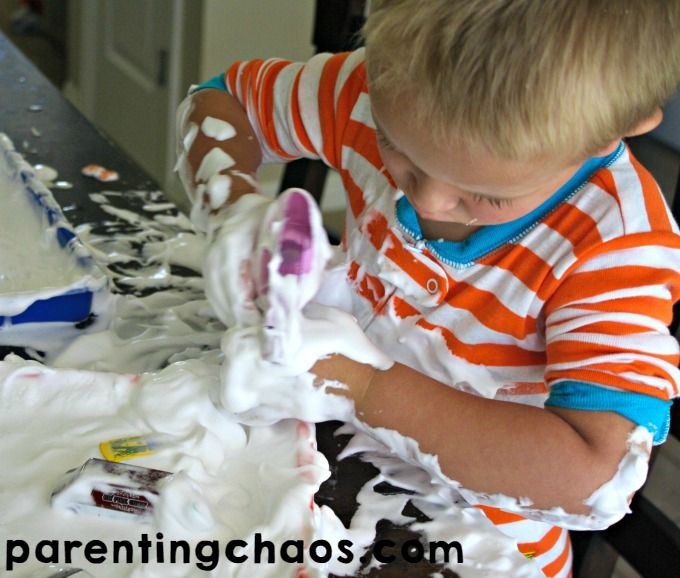 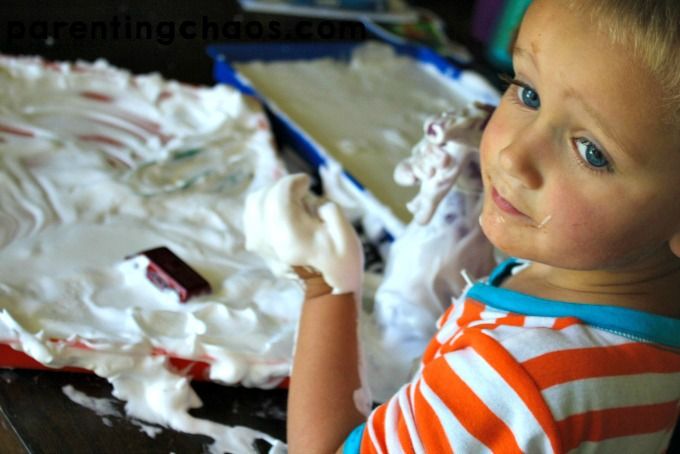 But, honestly it was so much fun we didn’t even notice the mess until we were covered. 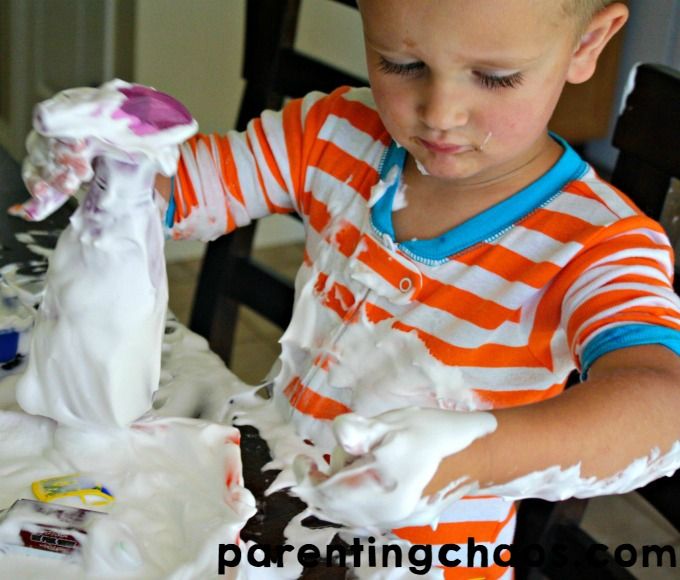 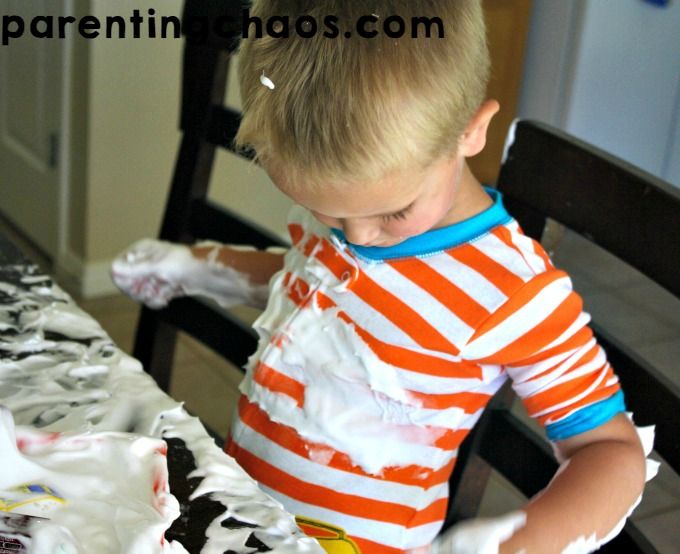 Clean up was definitely interesting, but honestly not too difficult. It was a great chance for the kids to work on cleaning up after themselves. I simply gave them the direction of placing all of the items into our sink and handed them some towels. As they wiped up the shaving cream I sprayed down the trays. All together it took 15 minutes to get it done.

We had an absolute blast with this shaving cream sensory bin and will definitely be doing it again!