This shop is part of a social shopper marketing insight campaign with Pollinate Media Group® and Playtex, but all my opinions are my own. #pmedia #RefreshYourNursery 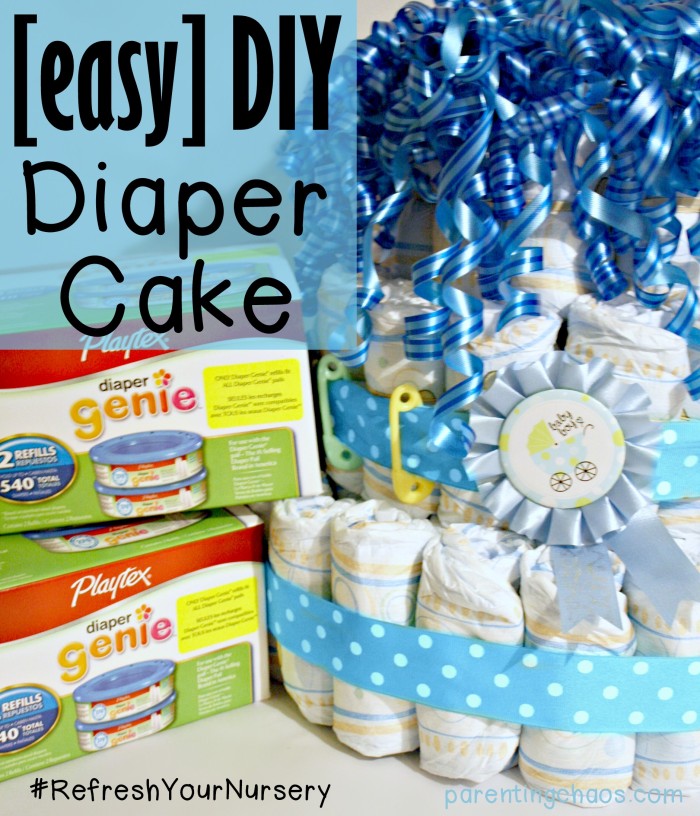 I will never forget the day I found out I was pregnant with my son. It was exciting and terrifying all at once. As we looked at the pregnancy test trying to figure out if it was actually positive the hubs looked up at me and said, “You can pick out the name as long as I never have to change a diaper”…

At first I thought he was joking. I mean –he couldn’t possibly be serious, but he was. Oh boy was he ever.

Let’s face it, diapers aren’t the most enjoyable aspect of being a parent. Does anyone sign up for this and say, man I can’t wait to change my first diaper. I can see why he found them terrifying…

Watching him change a diaper for the first time was priceless. Yes, I eventually got him to change a diaper. That first time I wish I had recorded it, because with two kids in the house now wearing diapers he is doing it like a pro. So how did I do it? 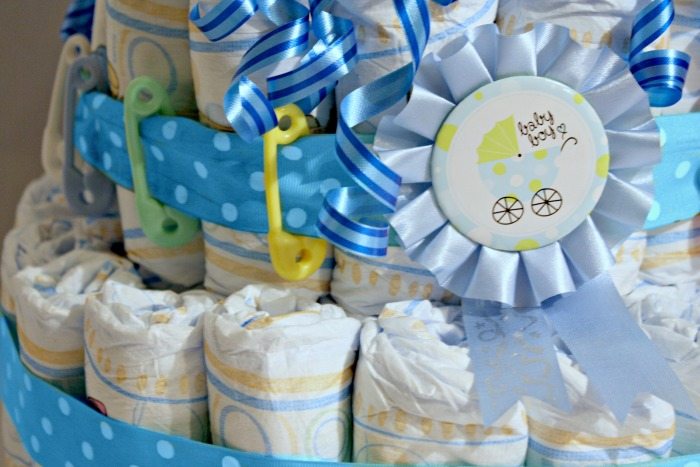 Diaper Genie for us was a solution to taking some of the disgust out of diaper changes away for him. Being that we live in a small space {and have two in diapers during the week} – no one wants to smell that. Showing him that changing a diaper could be quick, easy, and not too horribly disgusting got him changing diapers {eventually without help}.

Although the first couple times he did do it kicking and squirming.

In our home when it comes to nursery essentials, the Diaper Genie is at the top of the list.

Recently when my sister found out she was expecting a boy I could think of no better baby shower gift than a Diaper Genie Diaper Cake.

This cake took me about 30 minutes to make and was filled with items for baby.

For my cake I did not attach any toys in the photos shown but on everyone of the safety pins {found at Target} a toy easily attached. 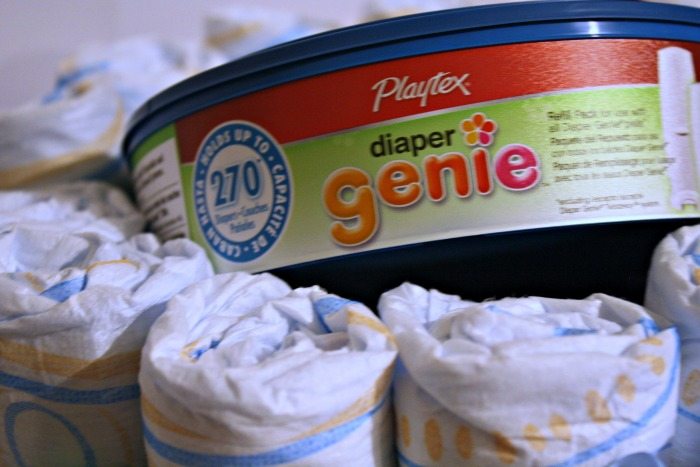 Instructions: {see slide show below on how to roll and secure diapers}

Stack your four Diaper Genie refills on top of each other to make a tower.

Roll your diapers and secure with rubber bands. 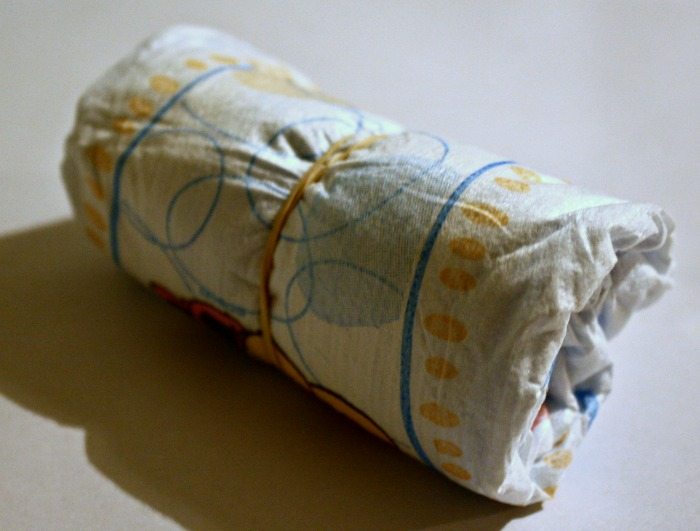 Roll a second diaper and make packs of two rolled diapers to one rubber band. 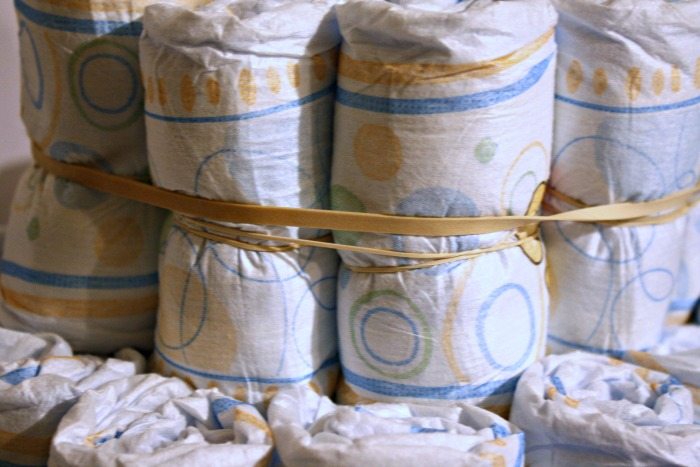 For the second layer you will do one ring.
Fill the cake with items and repeat step #4.
For the top layer you will used rolled diapers until the gap is covered. Once again secure with rubber bands. 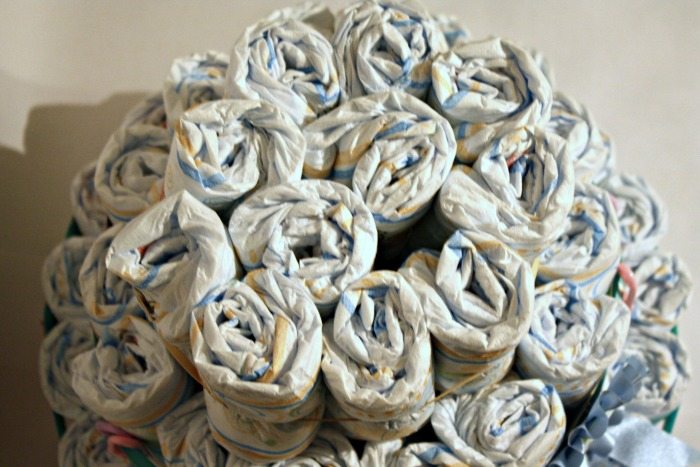 Hide rubber bands with a wide ribbon {secure with clear packing tape in back}, decorate, and you are done! 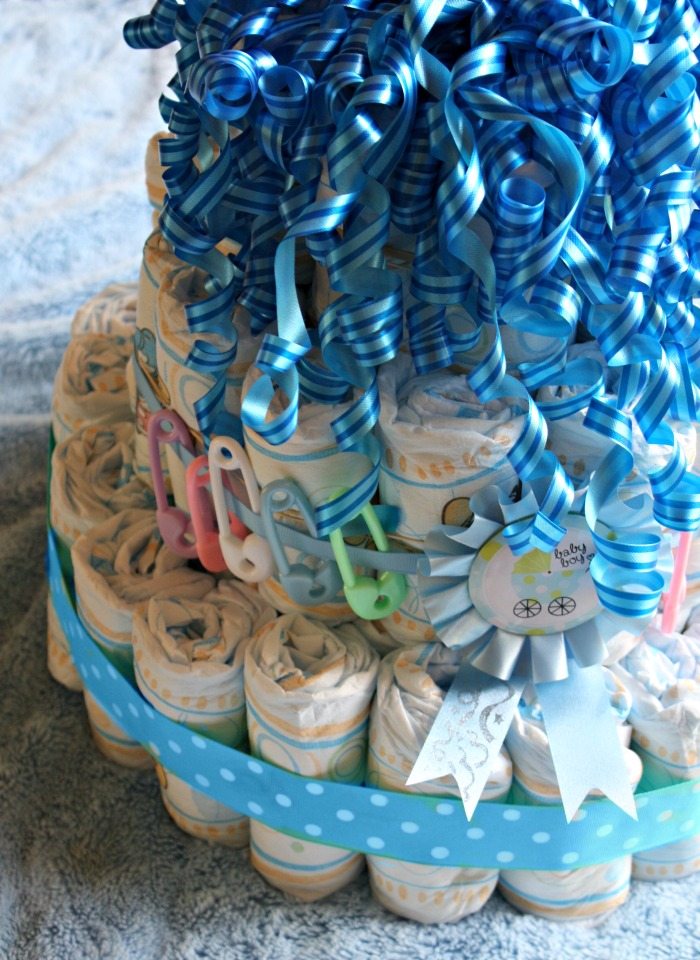 Diaper Cakes and the Diaper Genie are definitely a gift your Mom-to-be will love! Plus right now you can receive a $25 Spa Finder Wellness Gift Card when you purchase 3 or more varieties Diaper Genie at Target and by saving your Target receipt and going to their website {while supplies last}.