“I participated in an Influencer Activation on behalf of Influence Central for Hasbro and Playskool. I received product samples and a party stipend to facilitate my review, as well as a promotional item to thank me for my participation.”

Play All Day Elmo is a Wonderful NEW 2015 Toy

Twas the night before the play party and all through the house was a buzz of anticipation from all the kids, even the spouse!

What is a Play Party?

A Play party is a great excuse to invite friends over to play and have a party where no one person is the center of attention but rather PLAY is what is celebrated together. This play party though had a special guest, Play All Day Elmo!

The night before the party we got to decorating a bit, of course cleaning a bit too, but the most fun was making Elmo Cupcakes! 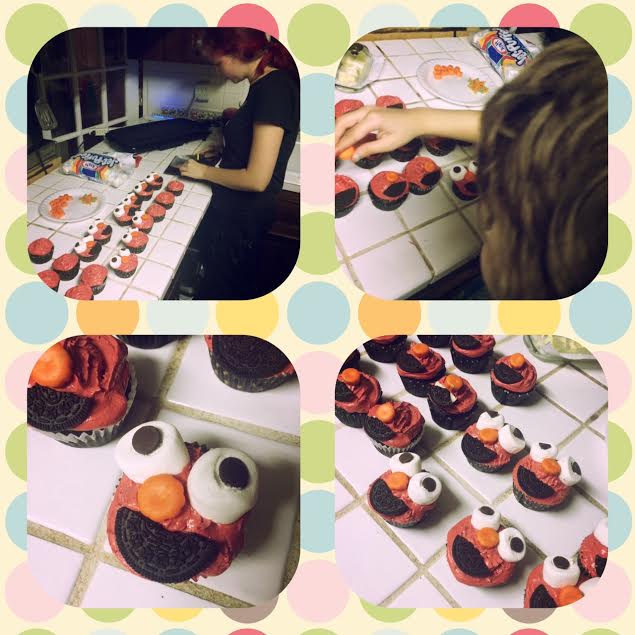 These are made using: Cupcakes (from a box in this case), buttercream frosting, large marshmallows cut in half, large chocolate chips for the center of the eyes, pumpkin candies with the green top cut off, and oreos cut in half for mouths.

I used a while small container of red food coloring and then another half container for a large red dye. They came out looking rather salmon colored to me but the next day we saw the color had darkened up! I would recommend not using the liquid dye like I did but rather gel food coloring instead when trying to make Elmo Cupcakes.

Setting Up The Elmo Play Party

The next day my family was full on Party Prep mode. I felt inspired by our coming play party and made a doodle quote on one of our homeschool chalk board as the party was centered around our homeschool room because of the space, and the room happens to be full of windows and the walls are red and white, like Elmo! 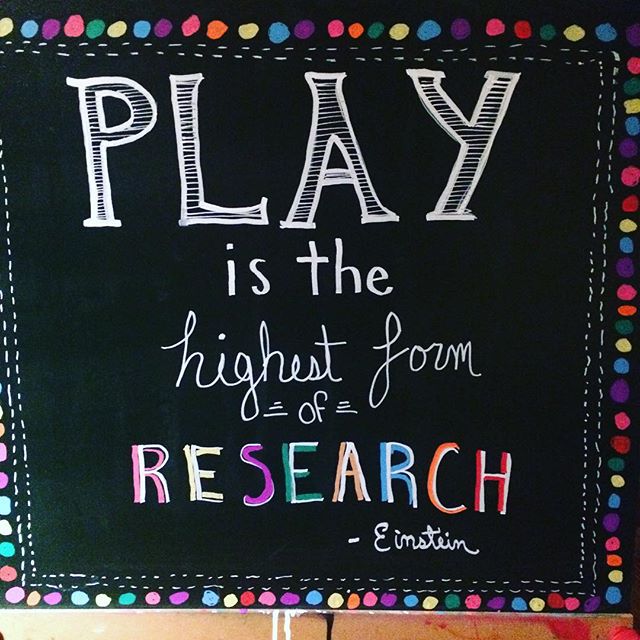 This is how the cupcakes looked the next day. 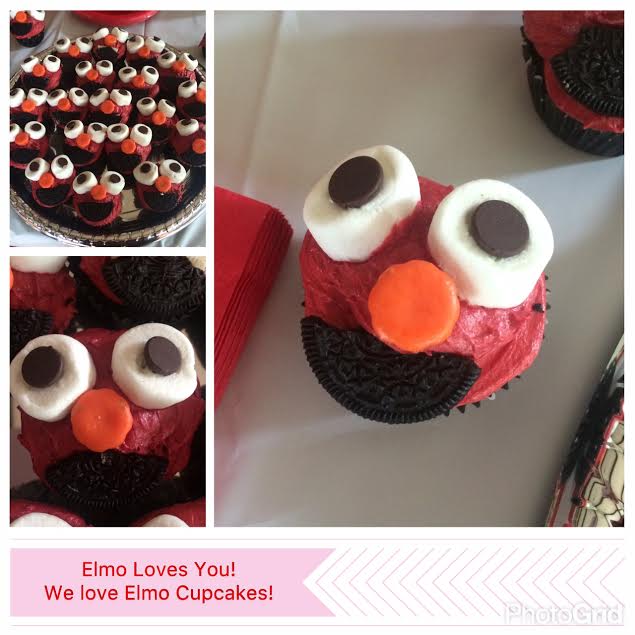 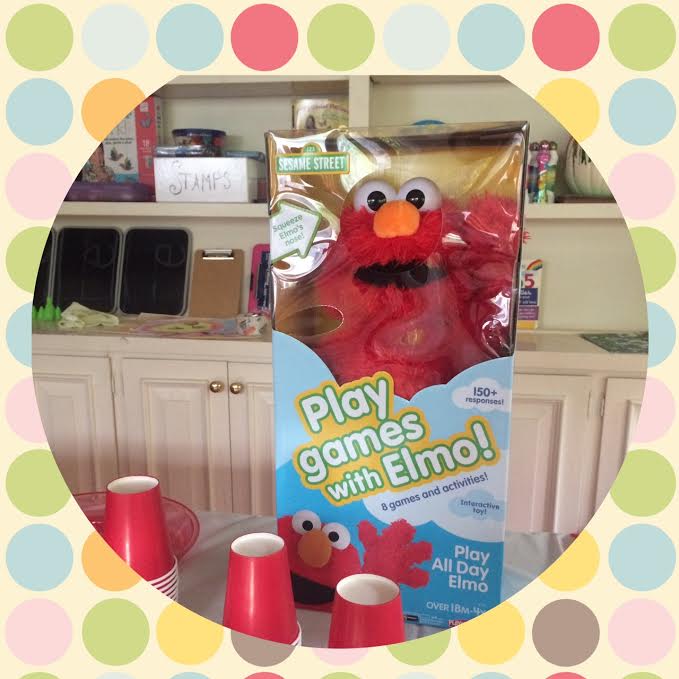 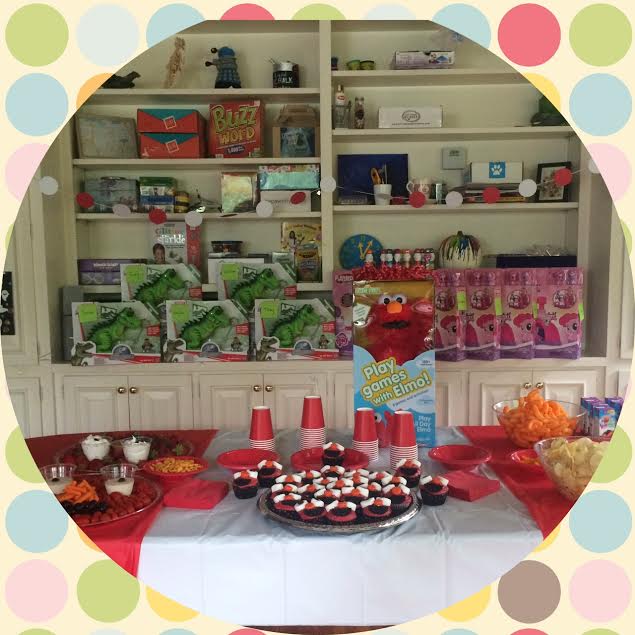 I think the set up is fun and inviting for a play party. Next time though I will make more streamers and such! 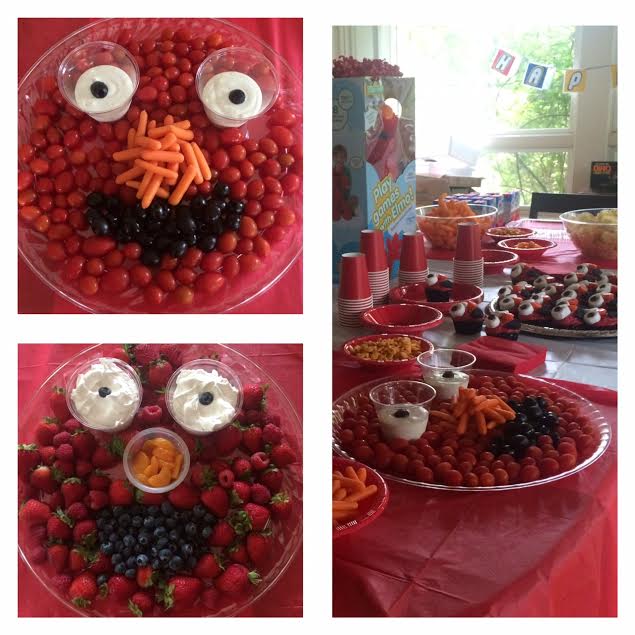 Elmo Fruit and Veggie platters are very easy, for the fruit one we used strawberries and raspberries for the red, blue berries for his mouth, a tangerine fruit cup for his orange nose, and cool whip for the whites of his eyes with blue berries for the dark centers. The Veggie Elmo is made with red cherry tomatoes. The black mouth is canned black olives, the orange nose is baby carrots, and the eyes are ranch dressing with olives in the middle. These were almost all eaten and the party guests loved them. Moms mentioned how normally their families don’t go after these foods as well as they did at the party. Kids love fun food! 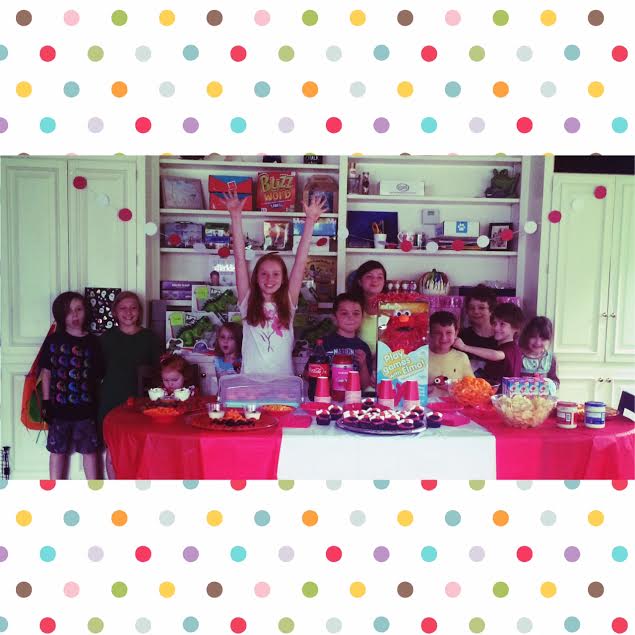 Soon the kids all flooded in. It was loud and bright and exciting and fun. I love a busy house with happy children. The photo above is of some of the kids but not all of them even! Getting them to be still for photos was a fun challenge! A blink later and off they all went to play, small groups found all over the house playing all kinds of things!

Thank You Hasbro Toy Shop For the Gifts!

And for all the Playskool Fun! www.hasbro.com

As For Play All Day Elmo, he got a lot of attention, specially from two little girls in love with him! 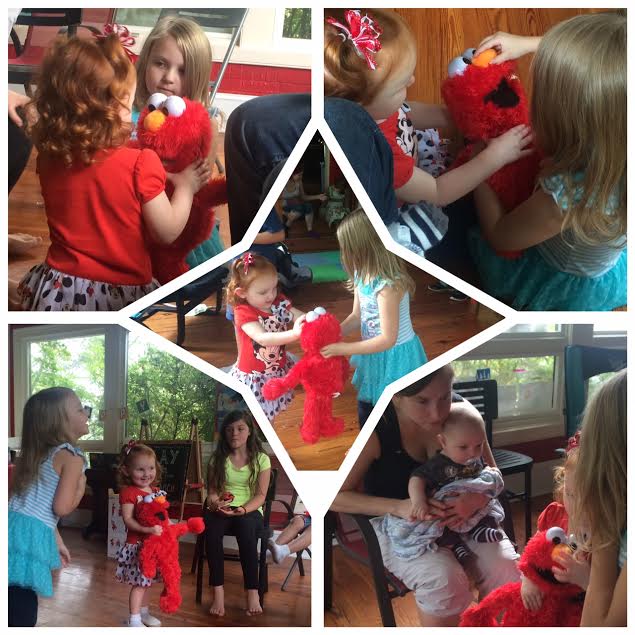 Play All Day Elmo is perfect for kids who have so much energy. While parents find it hard to keep up Elmo doesn’t! He say 180 things and has 8 games he can play. He has 2 settings, one for toddlers and one for preschoolers so he can play right on their level with them! His batteries and setting are in a velcro area inside his head. Touching his nose causes him to do certain things. He is so soft and very adorable. I have to admit for some reason I personally love to have my hand in his mouth when he talks, I think my baby loves it too! Everyone found him delightful and mesmerizing! What a wonderful toy! Lily, a friends very shy 2.5 year old opened right up to Elmo and then one of my own daughters who is 5. They became quick friends and inseparable. For 2 girls who had issues making friends before Elmo certainly changed that quickly! They loved Elmo games too!

What’s Up in the Sky

Elmo doesn’t just talk to the kids, but with them. Elmo’s built-in sensors help him respond to different activities in fun ways; he can react when he’s in the air, when he’s upside down, and even when he’s moving around. He also has a nap mode you can switch him to and when his nose is pushed he will sing a lullaby to your sweet little one to drift off to sleep with. 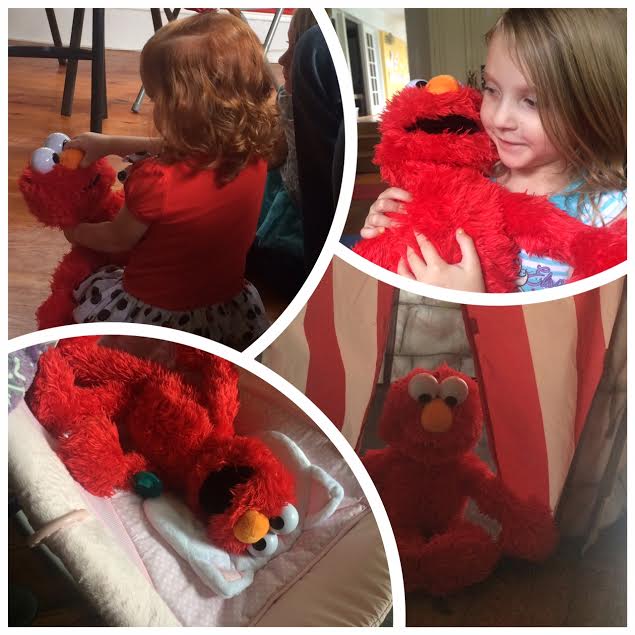 In addition to Elmo who is so fun to cuddle there are other toys from Hasbro you don’t want to miss! 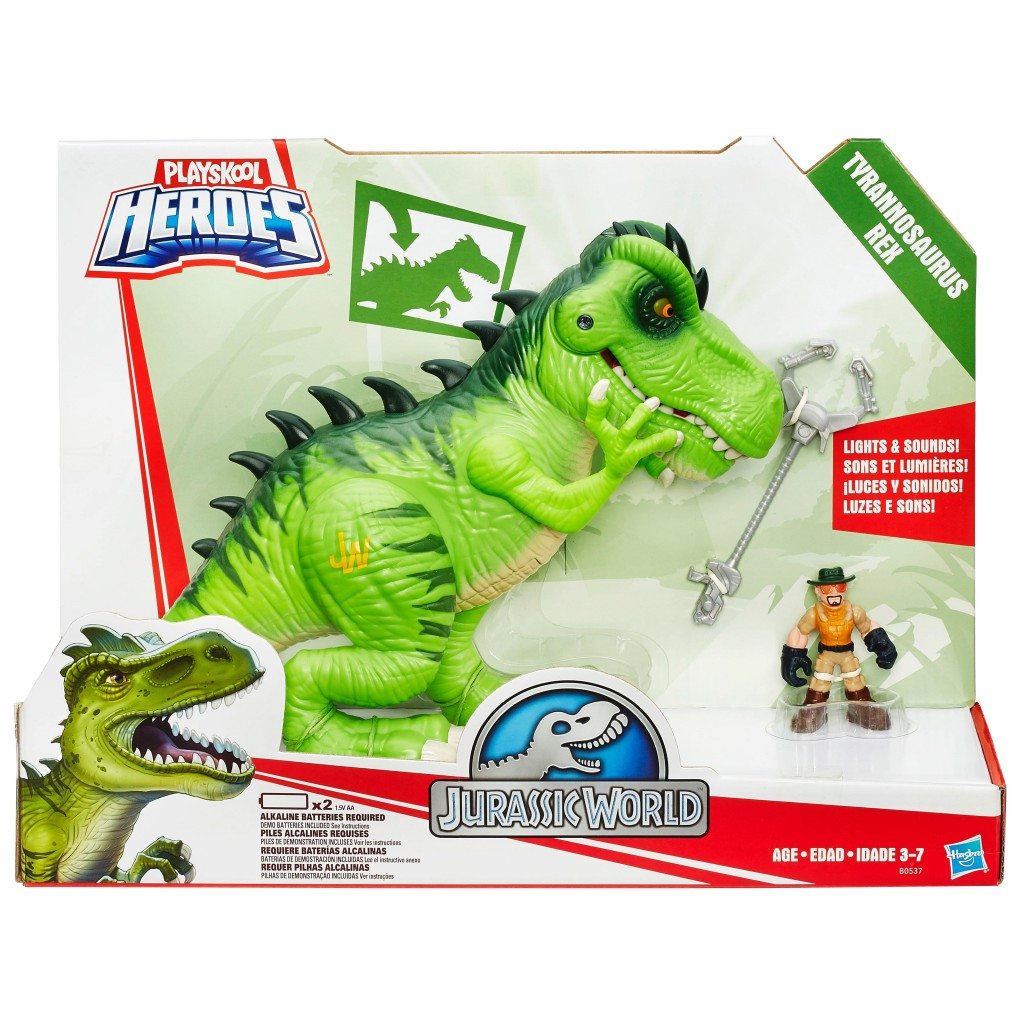 This Dinosaur is fierce and fun. When you press his neck down he opens his mouth he roars and his eyes glow. Even I found myself playing with him, granted I had him trying to eat all kinds of things. Don’t worry, I didn’t let him eat Elmo! He is just $29.99 and a real quality toy. I highly recommend him under holiday trees this year for little ones who love all things Jurassic. 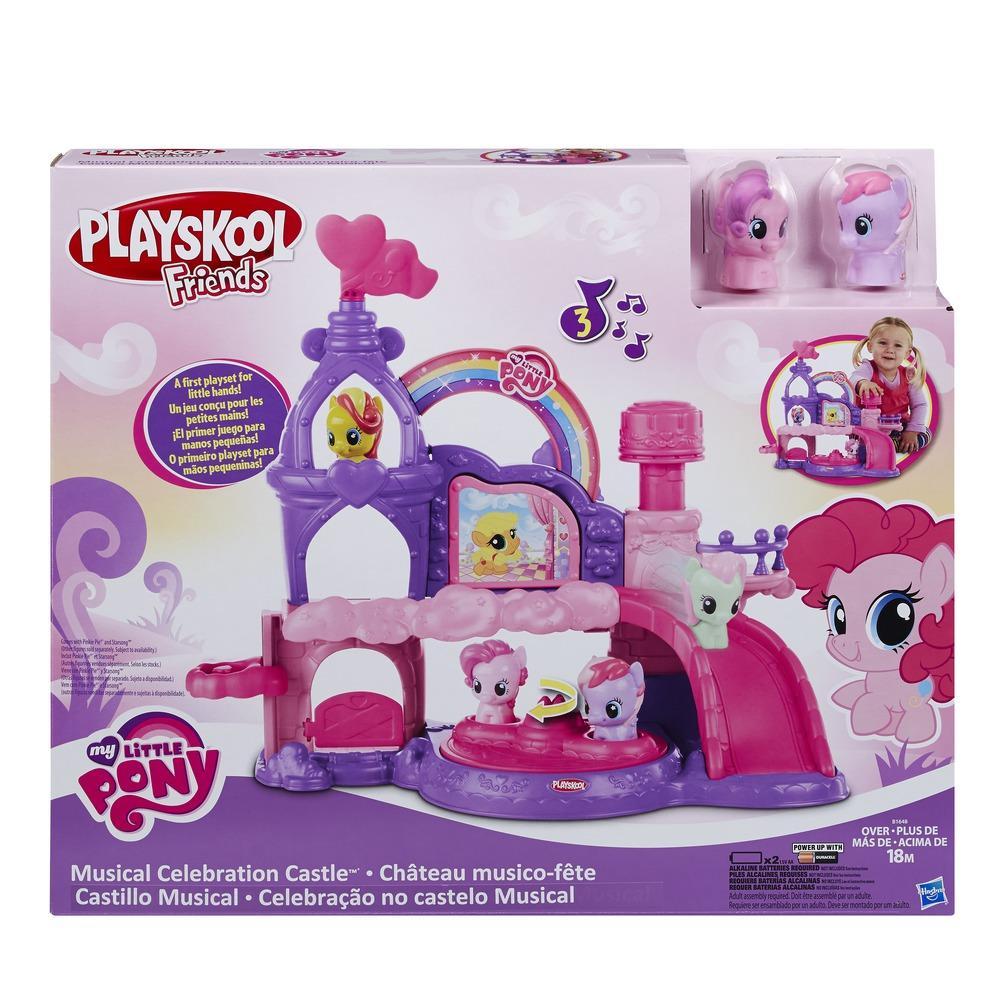 This toy is phenomanal for setting imagination alight. My girls have played with this toy for days and love it. It sings and spins and slides and shockingly the girls keep all the pieces together. So much of this moves and lends itself to easy imaginative play. My kids love the My Little Pony line and I love the $29.99 price point for this toy. Again, another toy perfect for under the tree this year.

Thank you for checking out our fun play party and I hope you have one of your own soon. Remember, Play is just as important as school and as Einstein said: Play is the highest form of Research!

Share your Elmo fun with us using the hashtag #PlayAllDayElmo!