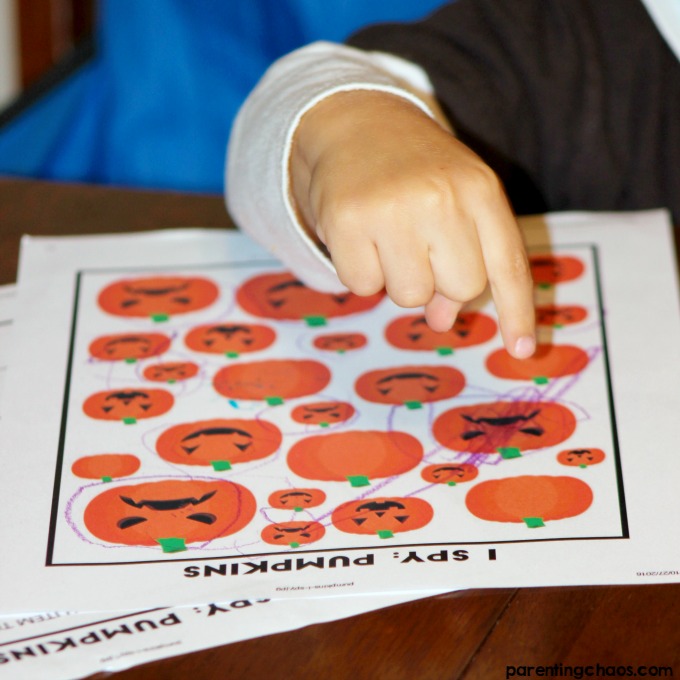 It’s pumpkin time! As soon as October begins, we start with pumpkin celebrations galore! Five Little Pumpkins Poem, sorting pumpkins by shape and size, and of course carving pumpkins! That’s why this I Spy Pumpkin Printable was the perfect October early math lesson. We used it to review alike and different and to introduce tally marks.

Items Needed:
We use affiliate links on site to help you easily find the items we recommend.

This was my son’s first time using I Spy Printables. To introduce it to him, I had him look over the different pumpkins and talk about how they were alike and different. Then he looked at the I Spy Printable to find an example of each type of pumpkin.

He was excited to start and immediately started pointing out the different types of pumpkins he found. After a few minutes, he needed some help to organize his counting of the pumpkins.

That’s when I introduced tally marks. I explained that each time he found a type of pumpkin he could circle it on the I Spy Printable then put a tally mark on the counting sheet. When all of the pumpkins had been circled, we could count how many there were of each.

He set straight to circling and tallying. Once he got the hang of it, he wanted to count and tally items all over the house! We’re still working on crossing the 5th number so for now, he’s just making a tally for each item (a one-to-one math concept).

Not printing this I spy game off right this second? Then pin this post so you can easily find it later!