Earlier this week I had a crazy idea and it worked. It’s not too often that they do. This simple no-cook recipe on How to Make Playdough with Skittles is so easy even my three-year-old could make it! 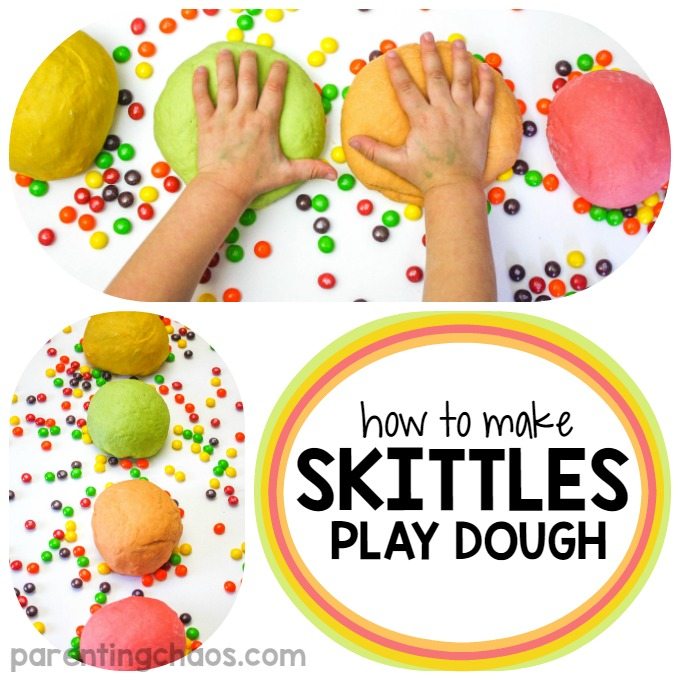 How We Came Up With Making Skittles Playdough

(because this story deserves to be told)

As I looked at the list I could not for the life of me figure it out.

The Items on My Daughter’s Hurt to Smell List

As I read each item I saw the pattern. So many different occasions where she had passed up something she would usually not hesitate with. Even seeing the instances replay in my mind, I could not for the life of me connect how these scents hurt her to smell. Then she finally told me. Her answer?

Well, that just hurt my brain, so I slightly get it.

You see, this commercial came out earlier this year for Mr. Sketch markers that claimed the way they scent their markers is through fruit farts. To most people they see that and laugh and move on with their day knowing it is a joke. To my daughter though? She is a little too literal for that.

So while she laughed over the fact that a blueberry farted, her brain got to thinking and listing out every single item she could think of that was made out of blueberry farts. As to how this hurts to smell, I have yet to get an explanation…but, I don’t want to be smelling farts so I don’t blame her.

This Skittle Playdough was made in an attempt to work through some of my daughter’s aversions to the scents on her list. To get her back to eating and using many of the items she had put on her “Hurts to Smell” list.

How to Make Playdough Using Skittles

This playdough is also perfectly safe to taste, so if your child is literal like mine is and decides to “Taste the Rainbow” no worries!