I have to admit, my kids have a bit of a candy addiction. Everyday when I clean I find little pockets of candy hidden throughout the house.

Even in the floor vents…that one was a fun one to clean up.

So, despite my attempts to clear this house of candy, there is never a shortage of candy around here. While this Skittles Science Experiment was absolutely fascinating, it secretly was my way of clearing out one more stash of candy. It took my kids three hypothesises for them to figure out the science behind this candy magic! 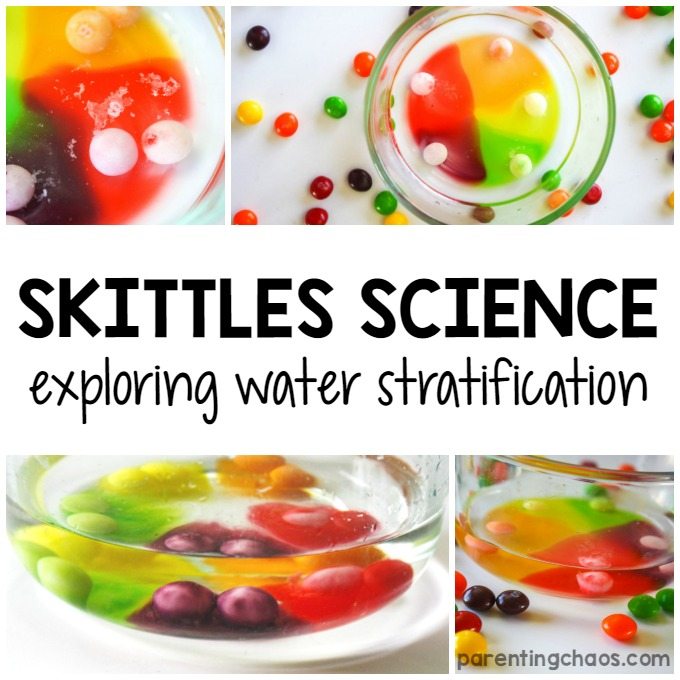 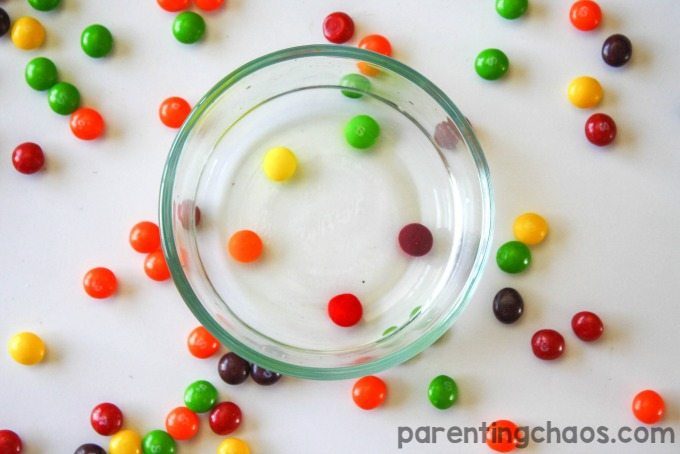 Without my children’s knowledge, I started this experiment the night before with two bowls. I did this because what happens to this skittles science experiment once the skittles completely dissolve is a great visual to spur on additional questions.

To begin this science experiment with my kids we first explored what happens. For this, I asked the kids to make predictions of what they thought would happen when the skittles were covered with water. My kids said they would dissolve and needed some prompting to encourage them to think deeper about their answers: Would the colors mix? How long would they take to dissolve? What do you think the center of a skittle looks like?

Once we had our guesses we began! 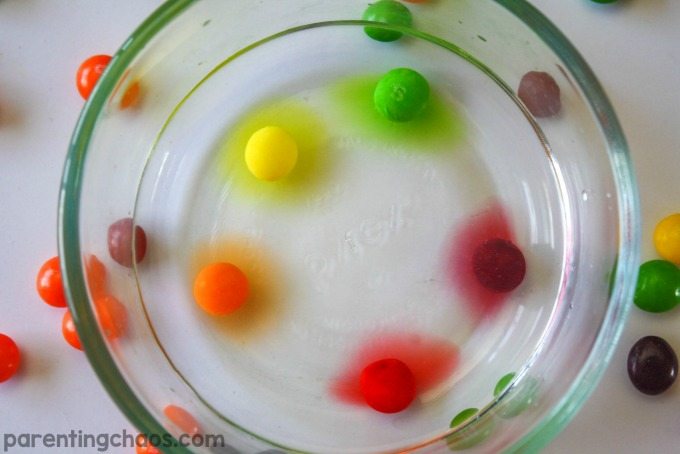 Place a couple of skittles around the edge of a glass bowl and cover them with water. Watch what happens! 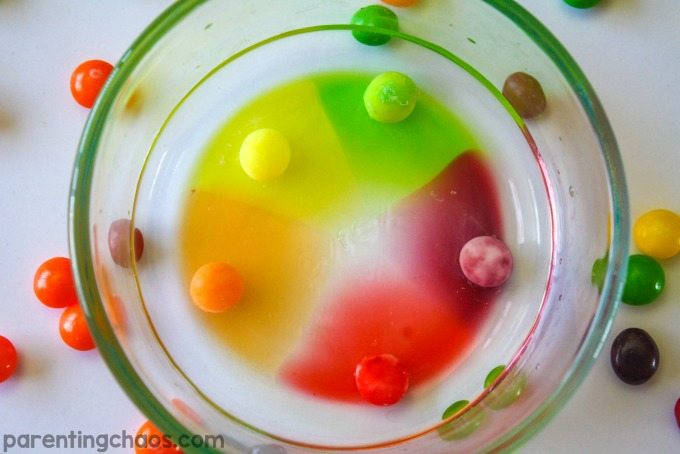 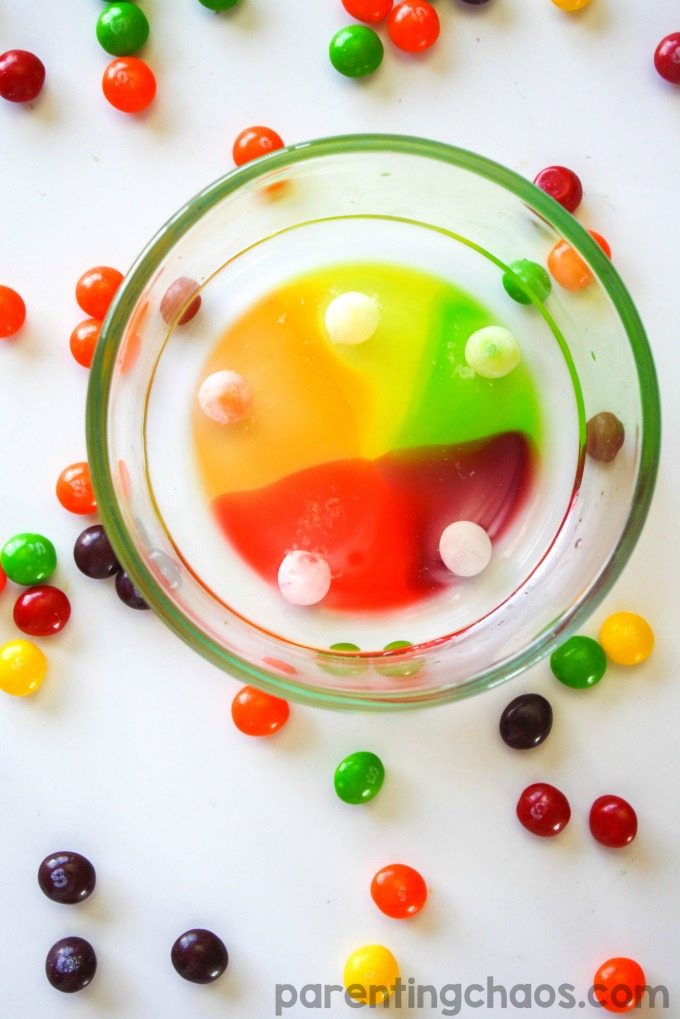 Within a matter of minutes, our Skittles has dissolved into this beautiful and bright display. And almost simultaneously every single child watching this science experiment gasped-

Then the questions began to pour.

Why didn’t the colors mix?

How did the colors meet at a point?

Why didn’t the water absorb the colors?

Why did the colors dissolve but the candy didn’t?

A million and one questions and a table full of curious and engaged minds.

At this point, I pulled out the bowl of skittles I had dissolved the night before for examination. 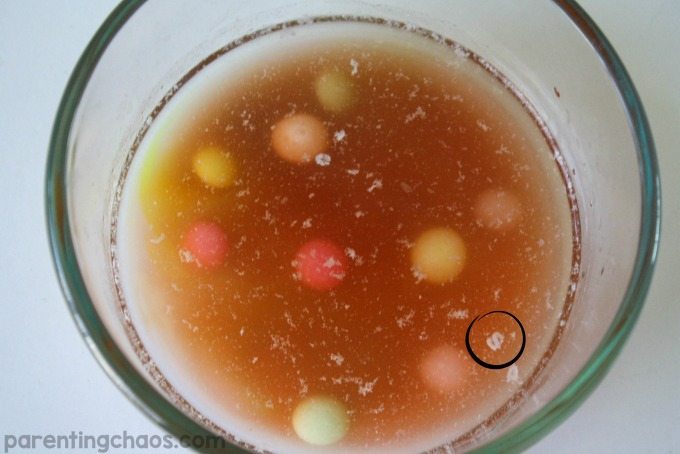 In our first bowl, the colors had completely mixed, but the candy had not completely dissolved. The kids thought it was awesome to see a floating S in this bowl. 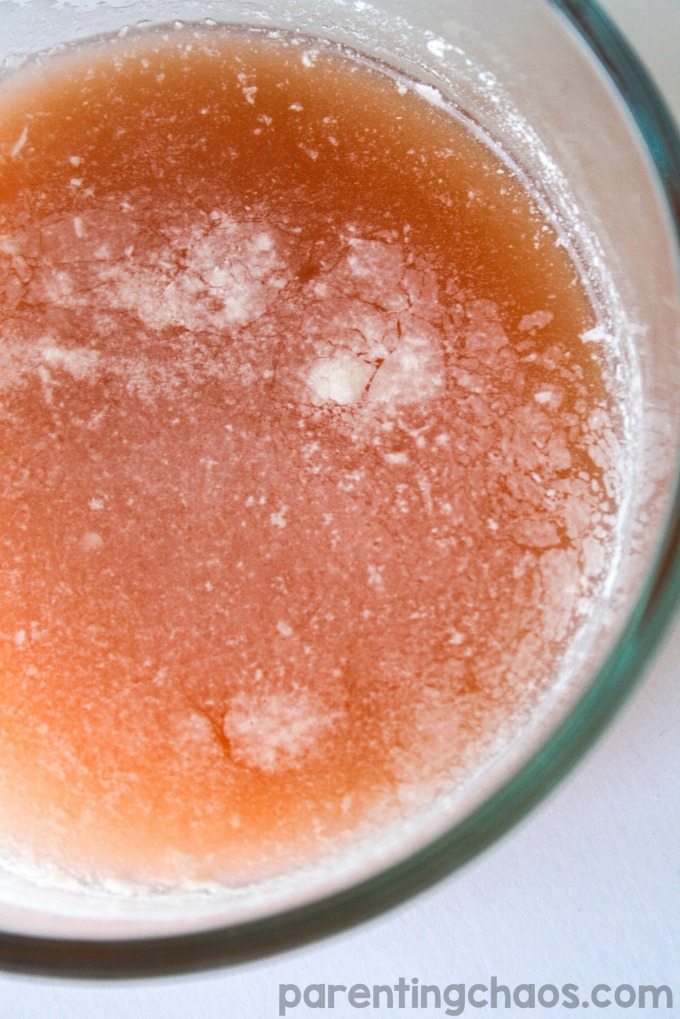 In the second bowl, the candy had completely dissolved and the water was covered with a waxy film. After inspecting all three stages the kids made their hypothesizes.

Skittles Science Hypothesis #1: The Wax Creates a Dividing Wall for the Colors

The first guess that the kids came up with was that the first thing to come off the skittles is a layer of waxy grease. That this layer of wax is what is used to trap the colors until the wax fully dissolves. To test this we added in a couple more skittles to see what they did. 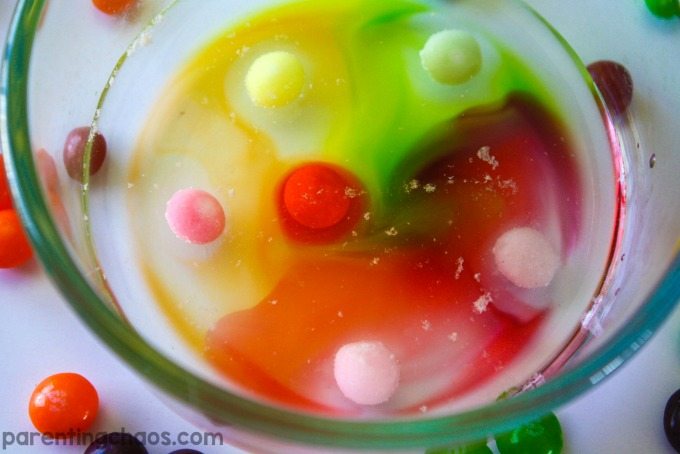 It may or may not have been just another excuse to watch the colors swirl. It’s so pretty! 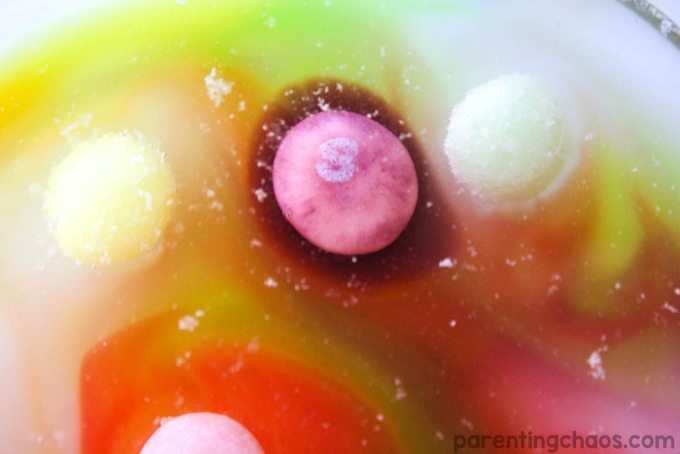 We also added in some Dawn dish soap to see how the colors would react. 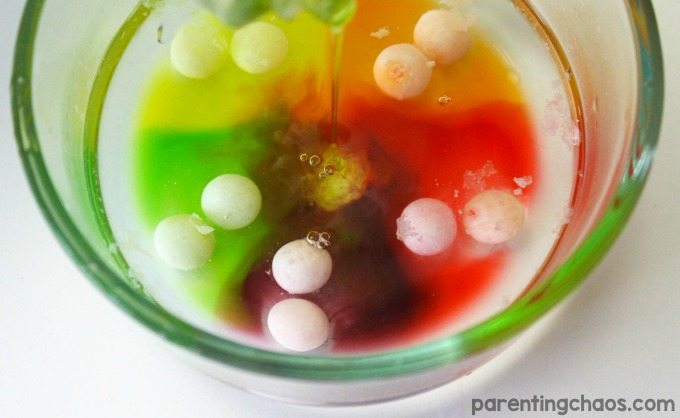 We had hoped that the waxy coating was somewhat of a grease base which the dawn could dissolve. 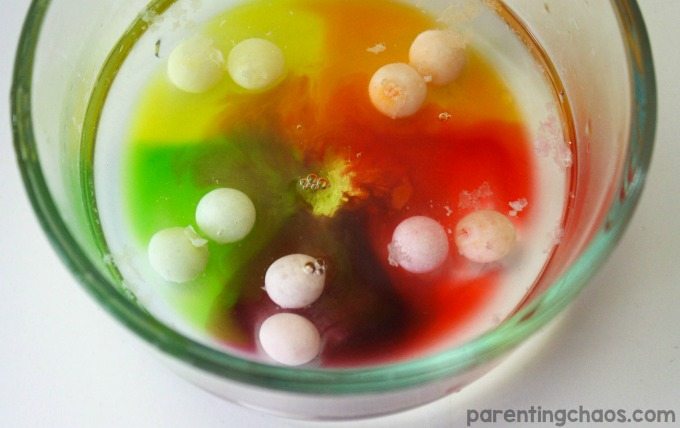 It didn’t. So we retested this time by washing off the waxy cover and colors on a couple first. 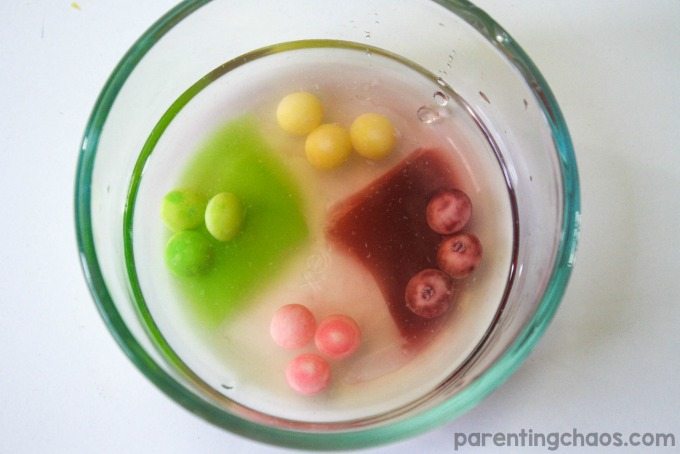 The colors still did not mix.

Skittles Science Hypothesis #2: The Temperature of the water Prevented the Skittles from Mixing

To test this hypothesis we set out two bowls, one hot and one cold. The skittles in the hot bowl dissolved quicker, but the really neat thing about this experiment was that the cold water dish created a beautiful display of how heat can create water stratification. 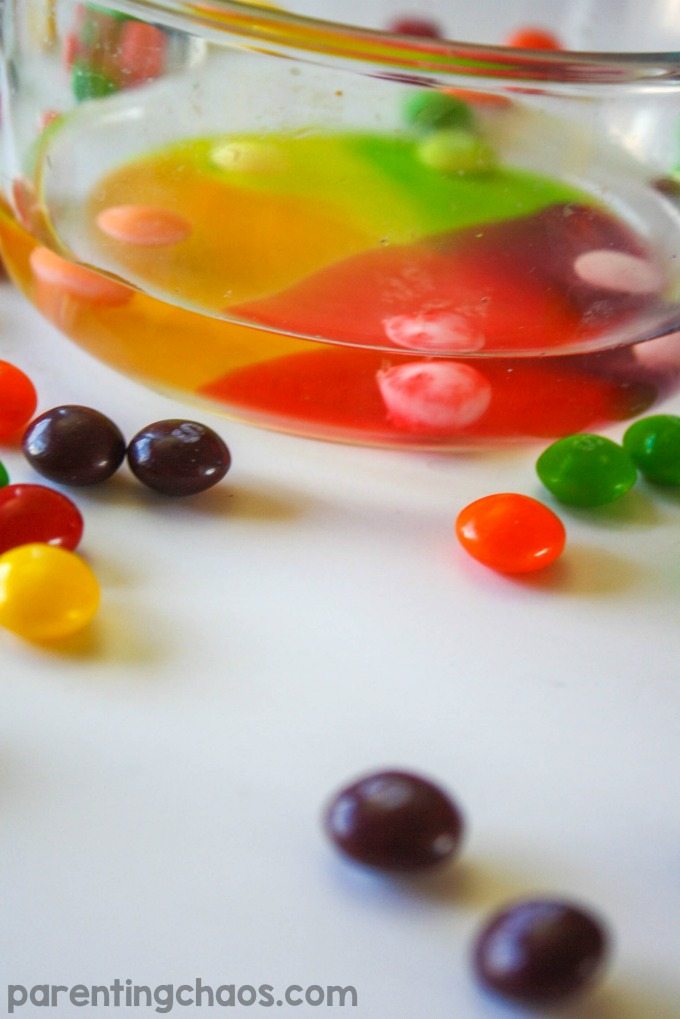 We also got lucky and caught an S floating up in the hot water dish. Maybe how quickly the heat caused the skittles to dissolved played a part in this? 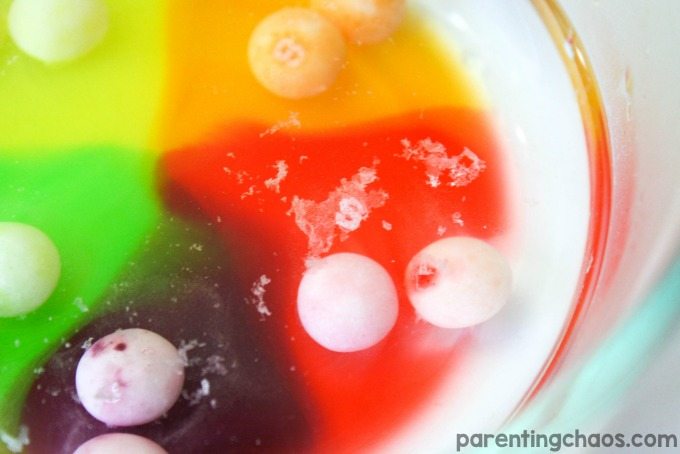 If the different colors of skittles contain different levels of sugar it would cause separate colors to be different densities. The kids thought that maybe this is why two reds together blend while a purple and a red together would streak. To test this we poured some corn syrup into a bowl of warm water and mixed it together. We could have gotten more technical and measured it, but since we didn’t know the weights of the sugars per candy we just dumped some in and went with that. Scientific…I know. 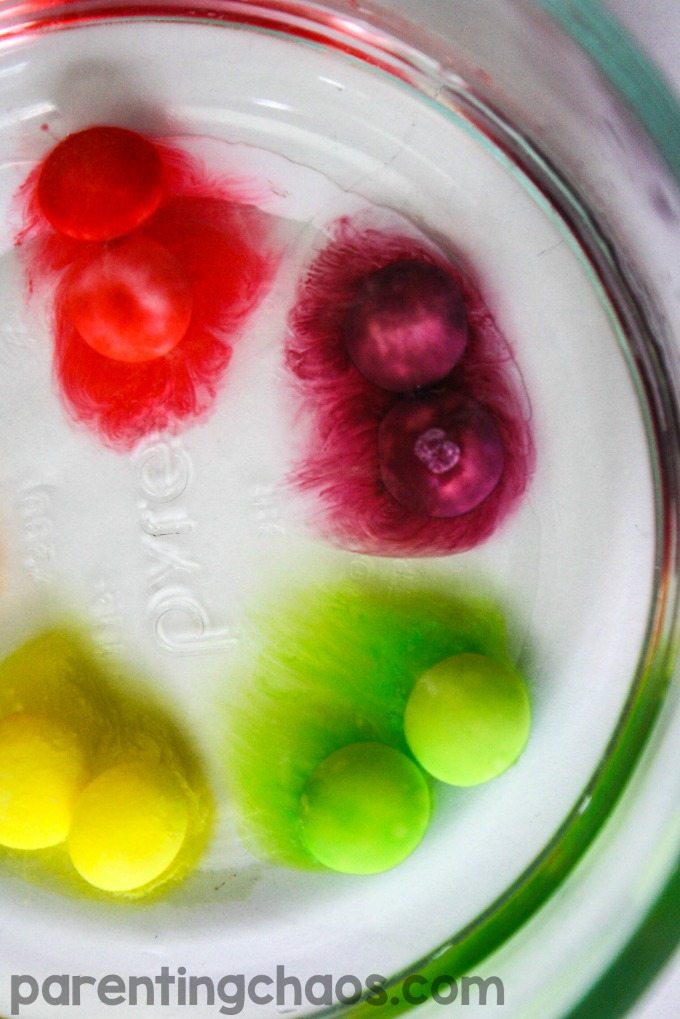 What the kids were able to observe in this dish was amazing. First, the skittles dissolved incredibly slow. This is what they looked like after an hour in warm water. Second, they were streaky and round, not a straight line like the other dishes. Livia described it as soft and feathery, which it totally is. 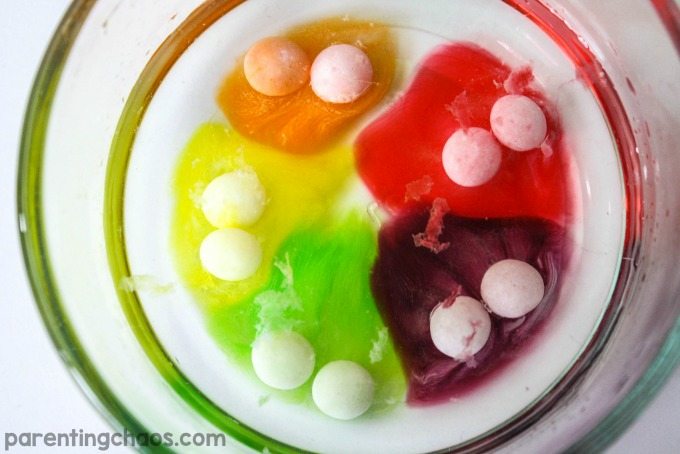 Once fully dissolved, although the colors did not mix, they had dissolved into each other differently than the other dishes. Nice soft corners…if you can call them corners. This dish gave the neatest visual on stratification too.

What is Water Stratification?

Water stratification is what happens when water displays different properties such as density, temperature, salinity, and oxygenation. These layers act as barriers that prevent the water from mixing. This is why salt water and fresh water do not mix.